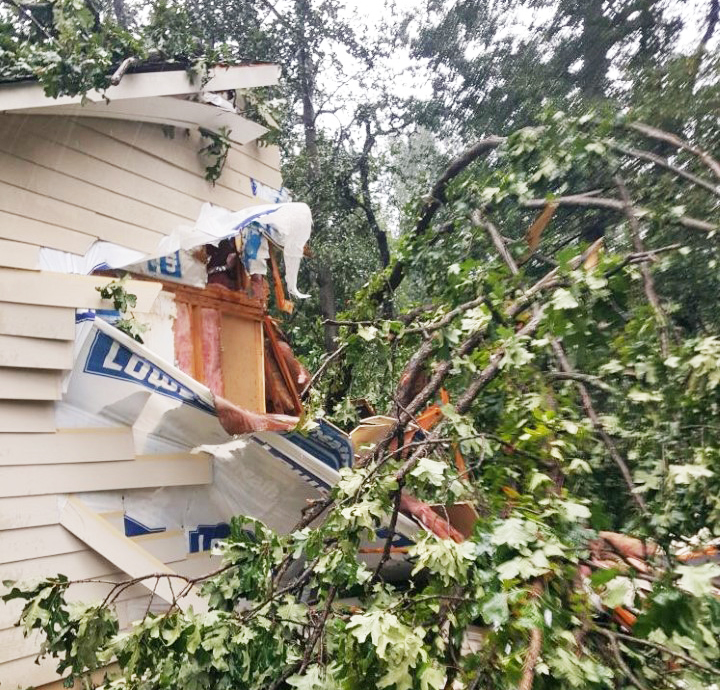 When the end of summer rolls around, we begin hearing the reports of threatening hurricanes.  While all storms bring the possibility of unpredictable tree failure, nearby hurricanes in the Atlantic Ocean and Gulf of Mexico heap elevated loading forces on Atlanta’s trees.

It is a bit uncommon for a hurricane-force storm to actually reach the Atlanta area, but hurricanes will often bring severe tropical storms to the city.  As the hurricane makes landfall, it weakens and slows into a tropical storm that can be quite persistent, dropping rain and high winds for an extended period.  These extended wet periods, combined with the wind factors, present many unusual problems for otherwise healthy trees.

Heavy storms test the limits of limbs and branches

When limbs and branches are poorly connected to the trunk, they are prone to failure. Wind or moisture accumulation pulls the wood past its compressive strength limits, and the limb separates at the top of the connection point.  If a limb contains decay along its axis, it may be prone to failure at the degraded part.  Some species of tree are more likely to fail in the limbs than others.  Species such as maple and pear are notorious for weak attachments at maturity.

Sustained winds, wind shears, and alternating wind patterns place a lot of loading forces at the base of the tree.  It is this area that must transfer all the loading to the root system.  If the base of the trunk is weak, the tree can snap and fall.  Many of our whole-tree failures in the Atlanta area are caused by rampant internal decay at the base of the trunk.  Why is this worrisome?  Many of the decay problems are invisible and not immediately detectable.  Sometimes if the soil becomes saturated with moisture, the shallow clay soils become over-lubricated.  Trees without strong and broad root systems cannot move around in the slippery clay soil efficiently, and can break at the roots.

Bending and swaying is not a problem, it is a solution.  A bent tree during a storm looks intimidating, but it is a reaction created for survival.  By bending, the tree reduces the net power of the wind.  It also reduces its overall profile against the oncoming forces.  Leaves and twigs bend as well, forming cylinder-like structures that reduce the “sail” presented to the wind.  It is believed that when a tree sways its different limbs in alternate directions, it breaks up the harmonic effect of wind, slowing down the wind speed within the tree canopy.

What you can do

Inspecting your trees for weak limbs and branches will give you an advantage before a storm hits.  Dead limbs are almost always the first parts of a tree to fail in a storm, with forceful winds inevitably overcoming the dead wood’s weakness.  Removal of dead or decaying limbs is primary insurance against failure.  A tree inspector will also look for limbs that are poorly attached to the trunk, or branches that are poorly attached to parent limbs.  Other techniques such as cabling and bracing are available for weakened limbs and stems.

Pruning of limbs that could become weak at maturity is a neglected service that can prevent future failures.  Some young limbs may form a tight angle against the trunk as they grow, and develop an inclusion that is lacking in strength.  It is often best to remove these limbs at a young age, rather than wait for them to become too large and difficult to prune.

An inspection of the trunk can reveal symptoms that decay may be present.  If the trunk of a tree is decayed, an arborist may recommend monitoring or possibly removal.  Trees with root damage can also be inspected to determine if the amount of root loss will significantly weaken the tree’s ability to remain standing.

If you have not had your trees inspected in the last few years, it is a good idea to have a review of susceptible trees prior to hurricane and tropical storm season.  While a homeowner can inspect for dead limbs quite easily, a trained and experienced inspector can spot other parts of the tree that are at risk of failure.

Give us a call today to schedule an appointment anytime that works with your schedule.Request A Free Estimate!

What Our Client Says