There’s a Mushroom Growing on My Oak…Now What? 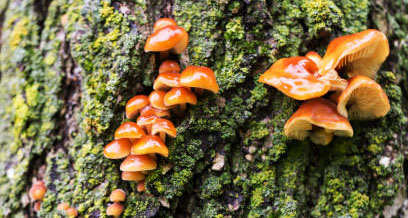 There’s a Mushroom Growing on My Oak…Now What?

Noticing a mushroom on a cherished oak, or any large tree, can be a disconcerting event.  Often a mushroom or mushroom-like growth appears suddenly, and takes you by surprise.  While many mushrooms can indicate a problem, others may not be associated with the tree at all.  Either way, it is important to ascertain the cause of the sudden mushroom appearance and determine if any action is required.

If you notice a Mushroom-like growth on your tree, contact Arborforce as soon as possible.

Mushrooms are the reproductive structures of fungi.  There are many types of fungal reproductive structures in the environment, but to keep things simple in this post we will refer to them as mushrooms.  Certain fungi are known to be decay-causing organisms, and the mushrooms are simply a fungal organ that assists in reproduction.  Removing the mushroom does not remove the fungi.  The fungi has other parts that are likely hidden from view. 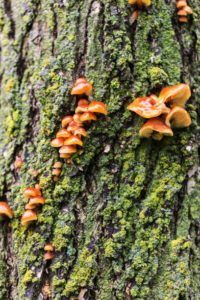 Mushrooms are a Symptom

The fungi associated with mushrooms are sometimes a symptom of other, more serious problems. If the mushroom is growing from the tree itself, such as on a limb or on the trunk, then it is likely the fungus is decaying the wood.  In some cases, the section of wood may have already died and the fungus is a secondary organism that is digesting the dead part.  This is a common scenario, and in most cases, the fungus is not the primary problem.  But what if the fungus is the primary cause?  Here, the decay is often more serious and could threaten the health of the entire tree.

There are several types: white, brown, and soft rots commonly associated with wood decay.  Wood decay is taken seriously because it results in the loss of tensile and compressive strength.  Many tree failures in the Atlanta region can be traced back to one of these types of wood decays.

Sometimes a mushroom may grow from the soil near the base of the tree. It could be originating from a root, or it could be coming from other source such as grass clippings, mulch, or other decaying soil matter.

Another problem with mushroom growth, is that some fungal reproductive structures aren’t really mushrooms, or may not look like a traditional mushroom.  What makes this so serious, is that a few of the root rots that cause catastrophic failures produce mushrooms that don’t really look like mushrooms at all.  That can be disastrous since these trees lose structural strength and go unnoticed for a long time.

We recommend that tree owners casually examine their trees every spring and fall for new mushroom growth.  Or, consider having an ISA Certified Arborist inspect your trees on a semi-annual basis.  Most significant decay fungi that lead to catastrophic failure can be identified with a simple visual assessment.

Give us a call today to schedule an appointment anytime that works with your schedule.Request A Free Estimate!

What Our Client Says